In 1983, neurosurgeon Mr David Brownbill AM and engineer the late Sir John Holland AC set up a research foundation to improve the treatment of stroke and other diseases of the brain and nervous system.

When stroke was identified in 1996 as one of Australia’s health priority areas of need, the organisation set its focus exclusively on stroke, establishing the National Stroke Foundation.

For more than a quarter of a century, we have championed breakthrough stroke research, successfully advocated for access to innovative treatments, increased public awareness in stroke prevention and recognition, and educated thousands of health professionals to deliver best-practice care.

Every achievement has taken a united team of stroke champions all working together with a single voice and purpose: survivors of stroke with their families and carers, health professionals, researchers, volunteers, employees, advocacy bodies, generous donors, corporate Australia, Governments and philanthropic partners.

We have made progress together, but we can do so much more. We know what we need to do to prevent stroke, save lives and enhance recovery. With everyone’s continued support, it is an investment we all can and must make for the health and wellbeing of future generations.

Our vision is ambitious: a world free from disability and suffering caused by stroke. We believe that together we can fight stroke and win. 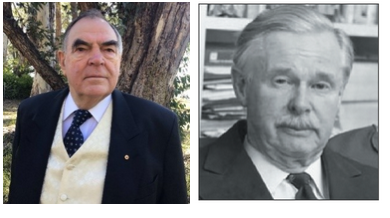 In 1996 stroke was made a national health priority by the Federal Government.

The first National Stroke Strategy was developed in conjunction with the National Health and Medical Research Council (NHMRC) and launched by then Health Minister, the Honourable Dr Michael Wooldridge in September 1997. Stroke strategies for Victoria, New South Wales and Western Australia followed.

In 1997 the Victorian Government funded a study titled Towards Cost Effective Victorian Stroke Care. A protocol was developed to describe and evaluate stroke services in the state – Stroke Care Outcomes: Providing Effective Services. This was the forerunner to best practice guidelines for stroke.

A new health education and awareness program aimed at the general public and health professionals was developed in 1998. The Brain Attack program with its ‘Brain Attack Butterfly’ mascot was launched in September by tennis legend Frank Sedgman AO as part of National Stroke Week, and dedicated to survivor of stroke, Rod Laver AC MBE. The mascot represented rebirth and recovery following a stroke.

Research continued as a focus under the auspices of the National Research Institute, a subsidiary of Stroke Foundation. Its research included NEMISIS, a $1 million epidemiology study of stroke – at that time the largest ever undertaken in Australia.

In 2002 the 1800 STROKE helpline was established to provide support to survivors, their families and carers to answer questions about stroke.

A new public education and awareness program was launched during National Stroke Week in 2004. StrokeSafe was developed to increase community awareness and reduce stroke risk. It launched with a major media campaign urging people to look out for the signs of stroke and live, although this was updated to become the F.A.S.T – Signs of Stroke campaign in 2007 (Face, Arms, Speech, Time).

In 2008, the Stroke Society of Australasia (SSA) partnered with Stroke Foundation to form the Australian Stroke Coalition. For the first time, groups and organisations working in the stroke field, such as clinical networks and professional associations/colleges came together to tackle agreed priorities to improve stroke care, reduce duplication amongst groups and strengthen the voice for stroke care at a national and state level.

In July 2007 the National Stroke Research Institute merged with Howard Florey Institute and the Brain Research Institute to form the Florey Neurosciences Institute. Following this a new Research Advisory committee was created, and the first Stroke Foundation Research Strategy was developed. During the same year the first National Stroke Clinical Audit was conducted into acute services. This, along with the organisational survey, continues today and remains the only national audit of hospital stroke services in Australia.

During 2007 a comprehensive report Walk In Our Shoes found survivors of stroke continued to struggle to regain their health after stroke. The Honourable Tony Abbott launched the report at Parliament House in Canberra with a delegation of survivors of stroke in attendance.

The following year, Know Your Numbers was piloted to raise awareness of stroke risks by undertaking blood pressure checks in pharmacies. A similar program continues today, Australia’s Biggest Blood Pressure Check (ABBPC) encourages health checks in pharmacies, at GPs and at community events, helping thousands of Australians to reduce their risk of stroke.

The Fight Stroke grassroots campaign was a significant driver in securing government support for stroke.

With a membership of more than 45,000 people, the vigorous campaign secured pre-election funding commitments for stroke from the Federal Labor Party in 2013 and 2016.

The revised Clinical Guidelines for Stroke Management were released in 2010. The National Stroke Audit Acute Services (2011, 2013 & 2015) and the National Stroke Audit Rehabilitation Services (2010, 2012, 2014 & 2016) continued to provide valuable data for health professionals to improve their practice locally. From 2016, this data has been delivered through InformMe, an innovative, online portal for health professionals.

In 2011, two pivotal committees were established to inform our work and provide advice to the Board. The Consumer Council included survivors of stroke and carers from across the country whose lived experience of stroke enabled a strong consumer voice into all aspects of our work.

A new Clinical Council of health professionals working in stroke ensured our work was evidenced based and informed by the latest research. Resources to support survivors, carers and families were developed, with the inaugural My Stroke Journey kit launched in 2013 which was first delivered to patients in acute hospitals nationally. It continues to be provided today.

Sharing the F.A.S.T. message meant more Australians became aware of the signs of stroke and patients were getting to hospital quickly. A $2m funding grant for a national F.A.S.T. campaign from the Federal Government in 2014 enabled us to share that message widely. Its impact increased awareness of what to do in a stroke emergency, with 87% of Australians able to recognise at least one sign of stroke.

An innovative online platform, EnableMe was co-designed with survivors and their families in 2015. It provides an accessible, safe, and supportive environment for the community to share experiences and access reliable information and resources to assist with ongoing rehabilitation.

In 2016 we refreshed the Stroke Foundation brand, depicting the brain to emphasise that stroke attacks the brain – our human control centre. That same year we invested in Australia’s first Stroke Ambulance, after many years of research into stroke treatment we know that providing a mobile diagnosis and treatment option can change the way stroke treatment is delivered in this country.

Since 2017 we have seen many lives changed through fast recognition of stroke and swift, specialised medical attention.

Bringing diagnosis and treatment to patients saves time and time saved is brain saved. For every 15 minutes saved in restoring blood flow to the brain, one month of healthy life is gained. This model provides patients with the best chance of making a meaningful or even full recovery from stroke, which is good for patient, their families, the health system, and the Australian economy. We ended 2017 with the launch of a five-year Strategy affirming our commitment to preventing stroke, saving lives, and enhancing recovery as we strive for a world free from disability and suffering caused by stroke.

2018 was another significant year for stroke in Australia with the announcement Federal Government support to develop a National Strategic Action Plan for Heart Disease and Stroke, a partnership between Stroke Foundation and the National Heart Foundation. The first plan of its kind, the Action Plan will set out proven solutions to prevent heart disease and stroke, as well as identify priority areas where increased research is needed to see breakthroughs in treatment and recovery.

2019 saw the announcement of the Cardiovascular Health Mission, a $220 million investment over 10 years to bring together researchers, health professionals, industry and patients to make transformative improvements in heart and vascular health and stroke for all Australians. We hope these pivotal investments in research and evidence based interventions, will enable us to reduce the impact of stroke for generations to come.

Also in 2019, the first ever Australian Childhood Stroke Rehabilitation Guidelines were released – a significant step in improving the lives of our youngest survivors of stroke. Stroke impacts an estimated 600 babies and young children every year and the burden of stroke can last a lifetime. This year also saw Stroke Foundation partner with the amazing community group Little Stroke Warriors to develop Our Family’s Stroke Journey a childhood resource now available in every paediatrics hospital across the country.

Along with the rest of the world, we were challenged by the impact of the COVID-19 pandemic in 2020. We are yet to truly appreciate the impact this crisis had on our community – how many people missed out or experienced delays in accessing emergency stroke treatment because hospitals were more difficult to access, and lockdowns made it more difficult to move around the community. We know that many rehabilitation services were forced to close for months in 2020 causing anxiety and concern for survivors and their families.

A silver lining is the increase in telehealth services and a willingness from the stroke community to embrace them. We see telehealth as an important tool for improving access to specialist stroke treatment in regional, rural and remote Australia. It can also enable survivors and their families to access ongoing rehabilitation, bringing these vital services to where people live and work. Telehealth is not the only solution but with further research and investment, it can help to bring equity of access to stroke treatment, care and follow up. It can help us to ensure that every Australian has the best chance of making a good recovery if they experience stroke. 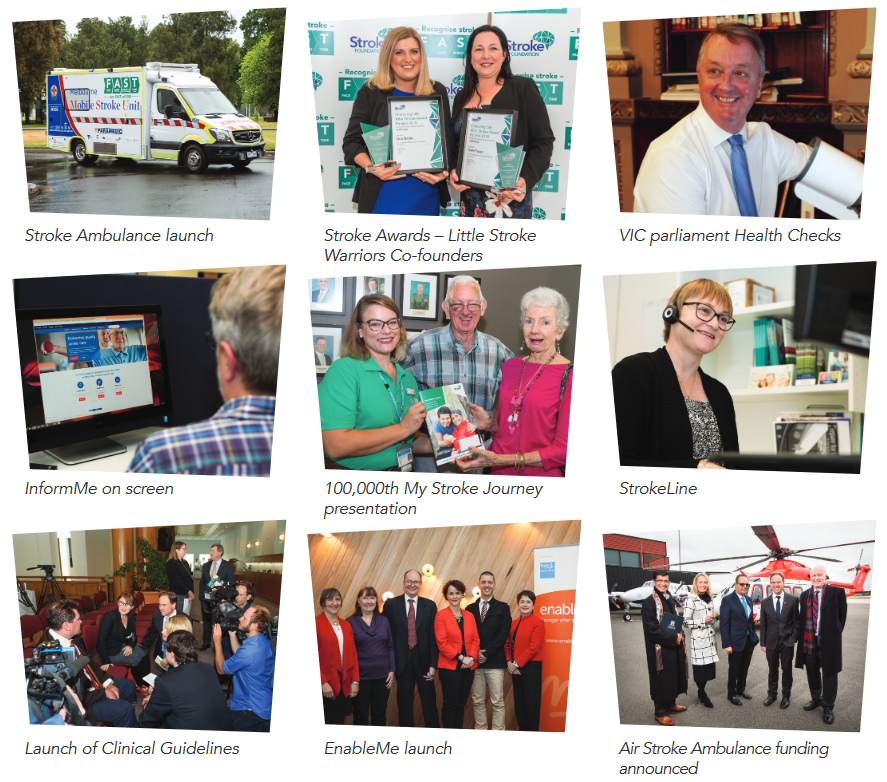 We have spent 25 years working closely with our stroke community and during that time we have seen a phenomenal degree of change.

Mortality rates have decreased, and more people are receiving lifesaving treatment, when they might once have never recovered. This comes from our successful investment in stroke research and innovations in treatment.

The way we share our messaging and support has become easier through the advent of the internet and social media platforms, so we are hearing more of your experiences, challenges and achievements. Importantly, we know we are helping more and more people to know their risk of stroke, to recognise the signs of stroke and access emergency treatment.

The coming years will see even more significant change to the way our health sector manages stroke treatment. We hope to see a second dedicated stroke ambulance in Victoria and one in NSW. Stroke Foundation is proud to be a part of the Australian Stroke Alliance, a partnership to develop light weight, portable brain imaging technology to equip more ambulances and, as a world first, to put a brain scanner in an air ambulance.

This innovative project, funded by the Medical Research Future Fund, will be a gamechanger for people needing emergency treatment in our rural and remote communities.

And more so than ever, we will be focusing on prevention. With 80 per cent of strokes being preventable we can make a huge difference to the lives of so many Australians through promotion of healthier lifestyles and choices. We look to the Federal Government’s National Preventive Health Strategy to improve the health and well being of Australians at all stages of life. We know that focusing the health system on preventive health action is the key to achieving a healthier Australia.

Our mission is clear – Prevent Stroke, Save Lives, Enhance Recovery – and we look forward to the impact we will make for Australians in our next 25 years.

Stroke Foundation would like to thank the many thousands of people who have generously donated their time and money to ensure we are here to support all Australians whose lives have been changed by stroke.