I had a stroke while I was asleep

My experience of stroke was unexpected and incredibly sudden. I woke up one day, early in 2017, and found I was unable to walk or control the left side of my body. I wasn’t sure why this was happening. Even though I was only 40 years old, I began to wonder whether I may have suffered a stroke while I was asleep.

The ambulance took me to the Emergency Department of my local hospital and within two hours I was having a CT (computerised tomography) scan. I was then flown to a larger hospital. A long weekend was coming up, so the doctors thought I would be best helped there.

I had six CT scans and numerous tests before the doctors determined I’d had a small stroke in the rear of my brain. They suspected the cause may have been a cough I’d picked up the week before. I had also lost 20 kilograms in the six months before my stroke and had come off the blood pressure medication I was taking.

Five days later, I had regained a fair degree of movement on my left side and the doctors were happy with my progress. They decided I should be flown back to my local hospital and transferred to the rehabilitation unit.

Once there, no beds were available in rehab so I was placed back in emergency. However, the nurses thought I seemed fine and didn’t need to be in hospital any longer. So I discharged myself.

After that, I focused on my own rehabilitation. The recovery of my left-hand has taken some time but my pinky is the only finger that is still a bit slow now. While this isn’t my dominant hand, I work as an IT professional so need to be able to type. Otherwise, my walking ability and other movement on my left side has returned to normal.

A few weeks after my stroke, my GP and rehab gave me the all-clear to return to work and drive. I have now been back at work for almost 10 months. In the following weeks I visited Rehab, my GP and had heart ultrasounds performed by specialists (all clear) and I returned to work.

I am so thankful to my wife Alison for the amazing support she’s given me during this entire experience.  I can honestly say I would not have made it through without her.

I am still encountering some stigma associated with having had a stroke, but I feel incredibly grateful that I was not significantly impacted. I am also back on blood pressure medication – and will be for life.

My advice to others facing a similar experience would be to talk to other stroke survivors in the first few months and to keep a check on the mental side of things. Stroke has a way of forcing you to prioritise your thoughts and your life. 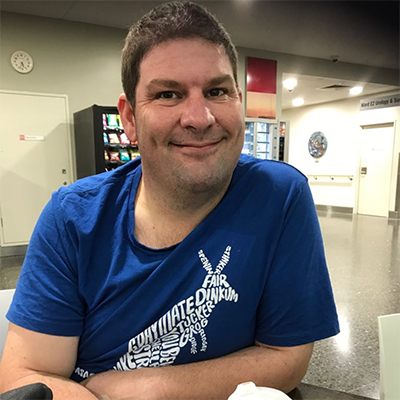