The wake up call I did not know I needed

After years of fast paced, high stress work my body decided enough was enough. The IT industry encourages success through tough quarterly goals and a “whatever it takes” attitude.

Wednesday the 4th of June 2014, in the midst of a routine skills test for work I started to show physical signs of being unwell. Thankfully my colleague insisted I stop immediately, and we go to hospital. At this point, the idea of a stroke hadn’t even begun to cross my mind. It wasn’t until the doctors identified my hemorrhage that it all began to sink in.

It’s believed my high stress lifestyle and high blood pressure were risk factors in my stroke. This was a wakeup call for me. Despite living an active lifestyle throughout my childhood, it became evident my health had fallen second to my career and work goals. Thankfully, due to the diligence of my colleagues, it was less than two hours before I was treated in hospital. Not long after that, I was placed in accelerated rehab. Doctors told me I would make a full recovery, but it does not feel like that when you’re trying to grasp the concept of learning to walk again.

With the support of my two boys and loving wife Jude, I was in a rehab facility ready to work hard to get control of my body again. The head of Physio was insistent I do the work as she outlined in my two daily visits to the gym. Jude said to her, “he will, he is focused and determined some might say pig-headed”. I had already made up my mind whatever the number of repetitions in each set of exercises I was given, I would do 10% more.

The gym environment was emotional. You’re surrounded by people giving you an insight into the different phases of your stroke recovery, yet it’s hard to see your own future clearly. You doubt whether you will make it despite the re-assurances I would make a 100% recovery. The moment of realization for me was when another survivor, whose initial condition was much worse than mine when he was hospitalized seven weeks earlier, was brought over to meet me. He was not another specialist telling me I would make a full recovery; he was an example of the same. He then put his hand on my shoulder and said: “You and I have been kissed on the arse by an angel.”

These are words I will never forget. Amongst my emotional devastation somehow I knew I was lucky.

Life continued to throw hurdles in the direction of my family. I was diagnosed with cancer in 2016 and very suddenly lost my wife in 2019. This was a lot to cope with within a brief period of time. But with the support of family, a lot of soul searching and time, I have found joy in my relaxing with meditation and a balanced lifestyle.

Now living an active and healthy life, eating a predominantly plant-based diet and in training with an initial goal of running a half marathon, I want to educate more people on the dangers of high stress work environments and an unbalanced work/life culture. That life is not sustainable – and you are not invincible. It can catch up with you when you least expect it. Looking after your health is so important for you and your loved ones. 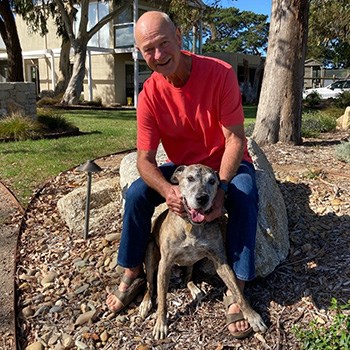